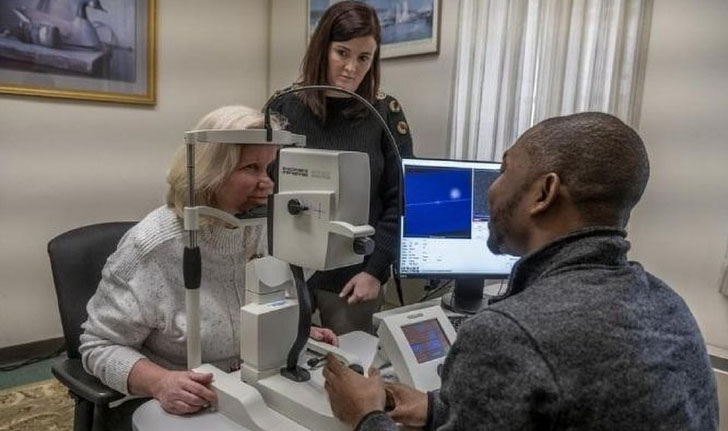 This clinical trial will study if a simple retinal exam can provide early detection of Alzheimer’s. Hopefully, the next groundbreaking study will show us how to stop the progression.

To read the full article published in “The Oklahoman” By G. Wayne Miller:
“SOUTH KINGSTOWN, R.I. — A comparatively simple eye exam that could detect Alzheimer’s disease many years before severe clinical symptoms appear is about to undergo a clinical trial sponsored by the University of Rhode Island, Butler Hospital in Providence, and BayCare Health System, a system of 15 hospitals and other centers in central Florida.

The so-called retinal screening tests someday could be administered by optometrists and ophthalmologists — at considerably less cost than today’s PET scans, which can detect the buildup of amyloid plaque in the brain, associated with Alzheimer’s, before symptoms appear. Such scans cost thousands of dollars and are not typically covered by most insurance plans.

“When our study is completed, we want to make the technology available so that optometrists and ophthalmologists could screen for the retinal biomarkers we believe are associated with Alzheimer’s disease and watch them over time,” said Peter Snyder, URI’s vice president for research and economic development and professor of biomedical and pharmaceutical sciences, and a principal investigator in the $5 million study.

“If clinicians see changes, they could refer their patients to specialists early on,” Snyder said. “We believe this could significantly lower the cost of testing. We may then identify more people in the very earliest stage of the disease, and our drug therapies are likely to be more effective at that point and before decades of slow disease progression.”

According to Monday’s announcement of the study, researchers are seeking to enroll 330 people between the ages of 55 and 80 “ranging from very healthy and low-risk adults, to persons with concerns about their memory, as well as patients with mild Alzheimer’s disease.”

Participants will be examined at four different times over three years, according to the announcement, “and each study visit includes an eye exam, a medical history discussion, some tests of how people think and how well they remember new information, the retinal imaging that is very much like the kind done at the eye doctor’s office, and measures of mood, walking and balancing, sleep habits and other types of medical information.”